In my previous blog post I eluded to a special coincidence…  This is the rest of the story!

Rewind the clock back to May 3rd of this year when I got a link to a post that contained the pictures from my flight with a shooter.  The same day I got a note from a former coworker who helped motivate me to get my pilot’s license.  After a conversation about flying he sent me a link and told me that any wannabe pilot has to be a member of the AOPA. I had never heard of them but thought I was definetly a wannabe pilot so I had to be a member, Right!  He was totally right and I was hooked on weekly doses of AOPA LIVE THIS WEEK. I have also used many of AOPA’s content including information to get my own medical, flight planning resources and their airport directory.

I digress, this is not about AOPA, this is about my “Fly Guy” friend and his incredible timing of sending me a note.  So back to the note.  I had just received the link from Andrew that had pictures of our flight from the previous year and then a few hours later I got the note from John, the Fly Guy.  He let me know that his company (my former employer) was sending him to Huntsville to scout out his new home if he chose to accept the relocation they had offered him.  He wanted to link up and potentially go flying!  This was awesome news as I hadn’t seen John in about 3 or 4 years.  These two things were not connected in anyway except for exciting my passion for flying.  I think everyone that knows me knows that I am obsessed with planes, flying, talking about flying, etc.  There was only one problem I hadn’t been flying in over a year and I needed to get my annual flight review done so I would be able to take the Fly Guy flying.

In the nearly year and a half my family had sold our house and we purchased a house and some land in a more scenic setting but still in Huntsville.  The house had been neglected for a few years even though the owners were still living in it.  I think they knew they were going to be relocating and didn’t bother with the house very much.  It would basically entail the following:

All of this work has taken much of my flying time and budget.   I also had an accident with a table saw which left me with a broken hand and lacerated finger and was out of commission for 6 weeks.  We hired a contractor to complete the remaining flooring who ended up just doing half the work before we had enough and fired him.  By then my hand had healed and me and my wonderful wife installed the rest of the flooring, the contractor didn’t actually install a single piece of flooring…  So I was busy during my year and a half of not flying but was missing it nonetheless.

So the timing of both getting pictures from my Test Passenger and notice that the Fly Guy was coming to Alabama all the way from California!  I gladly scrambled to get on my instructors schedule, she amazingly had an opening and was cheering me on to get back in the air.  I brushed up on my flying knowledge which had been kept intact from me watching a ton of YouTube videos on flying.

Speaking of those videos, I will make a future post on some awesome flying resources that is all free and available via podcasts and YouTube videos.

It took a lot of planning to arrange the flight including reserving the plane from the Redstone Flying club, watching the weather forecasts and predictions for the day.  I wanted to go to an airport that had an onsite cafe or restaurant.  I asked my instructor if she had any recommendations, she mentioned the Cullman Regional Airport KCDM which has The Prop Diner on the 2nd floor of the main terminal building right in the middle and facing the runway.  It has some great views of the parachute drop airplanes that operate on the weekends and planes coming and going.

With the plan in place, I picked up John from his hotel and we headed to the airport.  Since he is a pilot we were geeking out on all the specifics of flying out of Redstone and the different planes and helicopters that are around the airfield.  I filed the flight plan and we went out to the plane to do the pre-flight inspection of our ride for the day.

After the preflight we got in the plane and prepared it for takeoff, I taxied to the runway, performed our run-up of the engine and the final controls check and then we departed to the north on runway 35 then stayed in the pattern until we turned to the east to navigate around the Redstone closed areas (outlined in orange on the flightpath) then flew down and followed the parkway down to the bridge at the Tennessee river.  Once we were over the bridge we could turn in the direction to KCMD.  We climbed up to our planned altitude and followed the GPS track for the next 17 miles to Cullman.  Once we got to the airport pattern at Cullman we had to enter the pattern to avoid interfering with a plane doing practice landings.  We landed and taxied to the parking area beside the main airport building where lunch at The Prop Diner was waiting.  We went inside and ordered some really good food.  We had a lot of catching up to do since it had been a few years since we had talked.  John had recently started the process to get his medical under the new FAA BasicMed regulations that allow a private pilot to get a medical from their primary care physician v/s going to an AME (Aviation Medical Examiner).  This allows people that have had medical issues which has kept them from flying.  Under the new BasicMed private pilots can obtain a medical under the care of a general practice or family doctor that knows the history of that individuals health issues.  I had many questions for him about that process as I will likely go that route when I need to renew my medical due to the fact that their are fewer hoops to jump through and you don’t have to go over your full medical history since your doctor already knows this info.  I had a very enjoyable time, I think John did as well.  After we ate and talked for a while we headed back to the plane to fly back to Huntsville.  We had a very non eventful flight on the way back the air was smooth and the clouds were no where in sight.

John the Fly Guy, has been a huge inspiration for me.  Since the day I mentioned that I wanted to get my license he helped me out in pointing me in the right direction.  He also has provided me inspiration as a great example of perseverance and drive to get his own license a few years prior to me.  He was not able to get a traditional medical due to past medical events but he found a way to fly using Sport and Recreational flying.  I thoroughly enjoyed the visit and flight with John.  He was even generous enough to take my whole family to dinner to meet my wife and kids.  We all had a great time and could not have enjoyed talking about flying and visiting during those 2 days in May.

I will start this out by saying that this post was a long time in the making and I have delayed and procrastinated way too long, probably much longer than I should have…

It all started a few months after I got my ticket punched, see previous blog post about that…  I wanted to share my love for aviation and give the gift of flight to friends and family that trusted their precious lives in my hands.  So I started asking friends if they wanted to go for a short airplane hop around Huntsville to see the local sites from the air.

There were a few people that were cheering me on at work through my the process to get my license and one of those was also a pretty good photographer and aviation fan, Actually he is an excellent photographer! Andrew Gonzales gladly volunteered to be my test passenger.  The only requirement from him was that he wanted to take pictures of the whole flight.  Obviously, I had no problem with that!

The day was June 4th, 2015.  It was a hot, humid Alabama day with clear skies, great for flying if you can take the heat from the tarmac during the preflight and passenger brief.  I decided and planned for a short flight up to Fayetteville Municipal Airport, FYM.  It’s only about 25 miles north and a short 15 minute flight.  The route north from Redstone Army Airfield goes right past the US Space and Rocket Center  which has a pretty spectacular and famous Saturn V that is very visible when flying out of Redstone.  Andrew was sure to get pictures of the Rocket Center.

My favorite part of the flight was hearing the reaction from Andrew the moment the plane released its grip from the runway.  Not long after that reaction I saw him glued to the window with his camera taking lots of pics.

Approach to Runway 2 at FYM 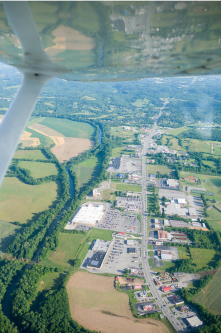 Check Out Andrew’s Post with a gallery of all the Awesome pictures that he captured during our flight!

After the flight I told Andrew that I wanted to see the pictures whenever he had time to edit and post them to his photography site.  We were both busy with life, work, and other things that I kind of forgot about the pictures.  Fast forward about a year to this spring and I get a link from Andrew to the pictures from the flight.  I was so excited with how they turned out that I was beside myself.  I should have posted this blog post at that moment but I was distracted a few moments later when another friend messaged me about taking a flight. There will be more to come with this story but I will say that it motivated me to get back in the air and start flying again.  After selling our old house and purchasing our new property and house flying had to take a back seat to a full home renovation that ensued for the next year.  The home renovation is still wrapping up so I’m not able to fly as often as I would like but at least I have made a few flights this year and hopefully a few more to come!